Here’s a review I wrote of two films at the 2013 London Film Festival: Rob Brown’s Sixteen and Jahmil X.T. Qubeka’s Of Good Report. This was orginally intended for the Vérité blog but not used in the end (duplicate commission). 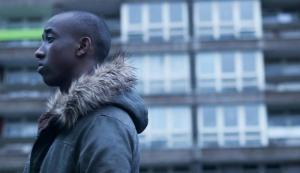 On the face of it these two independent films from young directors couldn’t be more different; one is a dingy South African township tale of a perverted teacher while the other’s a gleaming British urban drama about a trouble teen. But there are thematic similarities – they both concern an elusive central character trying to start anew and escape a disturbing past, whose inability to speak forms a key crux of the narrative. Their startlingly different approaches illustrate the completely polar way in which directors from different cultures approach their material.

Rob Brown built up an impressive portfolio of short films before attempting his debut feature, and it shows. Instead of attempting a micro-budget feature before his apprenticeship was complete, Brown not only developed his talent but amassed a range of contacts and benefactors whom he could call on to help mount this modest production.

Sixteen’s central protagonist, Jumah (Roger Jean Nsengiyumva) isn’t mute as such, but struggles to convey his past to those closest to him. No surprise: he’s a former child soldier from Congo, struggling to adapt to an alien new life in London. Difficult though it is to keep a lid on his own violent urges and suppressed trauma, things get even tougher when he witnesses a violent episode that puts him in the crosshairs of a local hoodlum.

Such a set up, in less mature hands, might have been an excuse to make a genre film with serious pretensions – one which mines the character’s wartime past to make them a more cold-eyed avenger during a final-act confrontation, in the manner of A History of Violence or numerous 1970s films usually scripted by Paul Schrader. But Brown steers well clear of presenting Jumah as any kind of vengeful action figure.

Nevertheless the story is still predictable in some ways, as it’s fairly clear Jumah will be tested and what the outcome will be, but Brown does pull some surprises. For example the criminals Jumah becomes entangled with are refreshingly moderate; all bluster and empty threats rather than the sadistic incarnations of evil usually seen in London-set films.

Oddly this makes the story less believable in a way, because their hesitancy makes it seem like Jumah gets too much of an easy ride, even though their behavior is undeniably more realistic and commonplace than the usual movie gangsters (this is one of those unfortunate screenwriting plausibility paradoxes that William Goldman used to describe).

The entire film hangs on Nsengiyumva’s performance and Brown has unearthed a real talent here. His gnomic front of suppressed torment, like a pent-up Easter Island statue, is brilliantly believable.

Brown’s major issue with this type of material was always going to be how to elevate it to something more cinematic, to avoid its sense of midweek-on-Channel-Four drama. Brown does as best he can, most notably in a languorous mid-section spanning several hours set in Jumah’s flat, which contains some lovely lighting and a hushed, pensive mood. 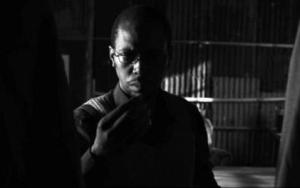 Director Jahmil XT Qubeka has no such worries with Of Good Report. Where Sixteen is expected to conform to specific technical and aesthetic standards, the result of decades of respectably cloying British film culture, Qubeka has the freedom to do what he likes. His showy and uneven camera style involves repeated use of ostentatious pull-focus shots and prowling POV sequences, while the editing and sound design is as roughly hewn and cobbled together as the shanty town shack his main character, Parker Sithole, inhabits. The fact that Sithole is one of the most dislikeable central characters in the movies since Patrick Bateman is probably also a tactic that would send shivers up the feeble spines of British development executives.

Sithole isn’t just reticent, like Jumah, but completely inaudible during the entire film, less of a result of the barbarities he’s committed in the past than because he’s a psychopath masking his true tendencies behind a thin veneer of respectability. Refusing to let Sithole utter a word throughout may affect our suspension of disbelief, but as a running joke it helps keep the tone humorous as the plot gets ever more twisted.

Qubeka couldn’t care a jot for consistency of tone or formal precision, so scenes of violence are interspersed with broad humor, flashbacks are confusingly jumbled around, and gritty toilet-cubicle sex scenes morph into agonisingly distended scenes of effectively mounted tension. Everything is overlaid with a deafening, clanking and wailing avant-jazz score which emphasises the insanity superbly.

Qubeka’s is a grungy, bloody, sweaty film that almost oozes its own odour; it’s silly and unbelievable, shocking, surprising and lots of fun. For many people it’s the kind of film that will signify the antithesis of quality drama and storytelling, but as laudable as Brown’s Sixteen is, I’d love to see British cinema adopt more of its rough-n-ready, risk-taking, devil-may-care attitude.