I’m not actually attending the Edinburgh Film Festival this year, but here are some short reviews of some of the films I’ve seen already, thanks to previews, screeners and the FestivalScope website.

Much has already been written about this film, but it is exceptional.I saw this quite a while ago now, but there’s not too much content to remember – it’s a highly textural film. If I had to describe it I would say imagine an even-more-wacked-out-than-usual Gaspar Noe filming a trawling documentary.

The first 20 mins constitutes the best horror film opening I’ve seen for a long, long time. Even though it’s not traditionally a horror film. That’s what so great about the film, it’s not just immersive and sensually disorienting, it also makes you think about camera styles and their relationship to generic convention. Essentially it’s a documentary that co-opts the filming techniques of the ‘found footage’ horror genre – using disorientation and a frenetic realist gaze to frighten us. But the found footage genre obviously is already reinterpreting documentary techniques! Postmodern circularity, I guess. When it’s not being frightening it’s a beautiful film to look at, and occasionally other genres also spring to mind – there’s a sequence where the camera is bouncing along the waves at sea level and as the spray flies off the surface towards the camera it resembles those star-rushing sequences in sci-fi films like Star Wars and 2001. Mesmeric, beautiful and (irrationally) scary as fuck. What more could one ask for?

This is Martin Bonner

This one had some good reviews from Sundance earlier in the year. In some ways it’s a quintessential US indie in its limited scope, simplicity and forensic character focus, but it clearly distances itself from the techniques and preoccupations of mumblecore. The film lives and dies on the strength of its acting performances – and they are really, really lovely, but the film offers little more than that. The eponymous protagonist is an Australian émigré (Paul Eenhorn) who’s had a mid-life spiritual crisis and moved to a different US state to take up a new job with a Christian convict-readjustment program. The film follows his burgeoning relationship with paroled prisoner Travis (a familiar looking Richmond Arquete). It’s one of those films in which the developments of character are so subtly drawn, and displays of emotion are so minor and incremental, that we find ourselves thoroughly hooked and emotionally involved despite not much actually happening. It’s a technique that took directors like Ozu years to master so it’s impressive to come from such a young filmmaker on his second feature. On reflection there probably isn’t quite enough drama or originality to make this a real classic, but boy are those performances something and the director is surely a talent to watch. 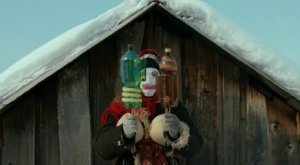 The Celestial Wives of the Meadow Mari

Sergei Paradzhanov’s son has a film in the EIFF program (Everybody’s Gone). Unfortunately it’s pretty bad and I couldn’t make it all the way through it. One to file in the Tengan Daisuke (Imamura’s son) pile, as a disappointment that won’t break out of festival circles, rather than something more successful like Antiviral. Thankfully the spirit of Paradzhanov is alive and well elsewhere in the festival in the form of this new film from Alexey Fedorchenko!

Paradzhanov is perhaps unfairly always the first director to spring to mind when confronted with films about the cultures and traditions of the Russian Federation’s outer extremes (although Herzog has also had a bash, with Bells From The Deep and Happy People: A Year in the Taiga). But it’s not just the geography and subject matter; the poetic and episodic style is also very redolent of the Georgian master. However apparently Fedorchenko has adopted a series of different styles over the course his few previous films, none of which I’ve seen, although I intend to seek out his much admired Silent Souls, from 2010, when I get a chance.

The film is examines the customs, myths and rituals surrounding women and sexuality in the Volga-Finnic community of the Meadow Mari in the Ural mountains. Structurally it’s split into 24 chapters, each following a different female character from the community, all of whose names begin with the letter O.

Fedorchenko presents these women as often fighting for control of their sexual determination in the face of the lingering powers held by the natural world, curses and local customs. Fedorchecnko isn’t particularly interested in how these forces contrast to the liberations offered by the modern world, and the film’s feels like it could have been made any time in the last century, and beyond. Most of the stories are strange, folkloric, animistic and  fairytale-like, and the women experience such oddities as harbouring a curlew in the cervix and having an affair with the wind. Others fall ill because they’ve desecrated sacred birch trees, while others battle with forest spirits and demons. There are weird customs involving pig’s hoofs and lots and lots of naked dancing. The rowan tree gets more onscreen mentions than in any other film since The Wicker Man.

Most of the women are presented as content and accepting of their situations, despite not being in control of their own destiny, which may present problems for some viewers. But I guess we’re expected to see the film as a non-judgmental ethnographic fantasy, on which basis I enjoyed it thoroughly. It’s surprising , enlightening, humanistic and  very funny.