I’m going to limit this piece to a pure consideration of the moral controversy surrounding the film’s depiction of torture, because in all other respects the film is excellent. A tense, dramatic, fascinating and intelligent thriller that it utterly captivating and superbly scripted. I do have some minor reservations about Jessica Chastain’s performance, which I think occasionally strays too far into the cliché of a lone warrior against the system, and at other times doesn’t quite hit authentic notes, but which on the whole is generally satisfying. All of the other ensemble performances are very strong.

My reaction to the film surprised me because I’m usually very generous in my moral judgements about films. I often find myself rolling my eyes at critics trying to ‘out-liberal’ each other by finding something distasteful in art that strays from the safe and comfortable. I fully expected to endorse the view of director Kathryn Bigelow and screenwriter Mark Boal that to excise torture interrogations sequences from the story of the hunt for Osama Bin Laden would be absurd and disingenuous.

But I have to admit I did find something about the film’s approach troubling. Bigelow and Boal have stated that their intention was to adopt an impassive, documentary approach that simply depicts events in chronological fashion. (And Bigelow has crafted a neat phrase to summarise this defence:  “depiction doesn’t equal endorsement”.)

Some critics have countered that in choosing to depict torture sequences the film necessarily endorses the Bush doctrine/CIA stance on torture, but I don’t agree with this view. Any film about this era of CIA intelligence gathering would would have to broach the subject of its most dramatic and controversial practices. So I agree with Boal and Bigelow it needed to be included, but my main problem with the film lies not with what the makers decided to include, but what they excluded.

The story of the hunt for Bin Laden is told through the eyes of the central character, CIA agent Maya, who spent a decade chasing up leads about Bin Laden’s ‘facilitators’; junior Al Qaeda figures in military terms but trusted lieutenants essential to the organisation’s survival. She becomes obsessed about one man in particular whose name keeps cropping up – Abu Ahmed – and it is this name which eventually leads her to Bin Laden’s hideaway in Abbottabad.

The opening scene of the film portray Maya and her colleague Dan interrogating and torturing a prisoner at a black site.  In these early sequences Maya is shown flinching at the brutalities dished up by Dan, and already we can see Bigelow struggling with the script’s inherent contradictions. It’s imperative that Maya is presented as at least slightly sympathetic, so Bigelow has to depict Maya betraying the merest flicker of discomfort at Dan’s torture methods. But Maya also has to be presented as a convincing CIA agent, so minutes later she’s hardening herself and visibly resolving that this is the only way to achieve results.

All of the film’s problems and controversies stem from anchoring the story around Maya in this way. Had the film been a more multifaceted ensemble piece with no true central character, perhaps in the vein of late 1960s war films, or even another successful post 9/11 film in the shape of United 93, it may be more convincing as a morally objective work.

In the final chapter of the film we experience the culmination of Maya’s investigations; the infamous Operation Neptune Spear at Bin Laden’s compound. It’s a fascinating sequence which passes much more slowly and quietly than many will have envisioned it in their heads. Here the documentary approach works superbly; its otherworldliness ironically imbuing it with a certain authenticity. As the Seals go around shooting unarmed women in front of their children, using their ominously near-silent assault rifles, it does feel like the grimmest and most unglamorous depiction of war imaginable. This section is more convincing in adhering to Boal/Bigelow’s vision of moral impartiality for the very fact that we can’t identify with any of the characters. We are mere witnesses to an anonymous assault, just like the bewildered, awakened inhabitants of Abbottabad.

Following the successful conclusion of the operation we’re treated to the closing moments and coda of the film. Maya is understandably emotional following the culmination of her ten-year quest to eliminate the Al Qaeda figure. The film ends with her (very minor spoiler here) sitting in the rear of an empty Hercules plane, being asked where in America she’d like to return to. She cries because she doesn’t know – she has no friends or life back in the US; she’s only known the hunt for Bin Laden.

The emptiness and senselessness that Maya feels is surely intended to provoke the audience to compare Maya to the country she’s returning to. If Maya has lost some of her soul in the search for Bin Laden, perhaps America has too. If Maya is returning to an alien land, perhaps that land itself was also complicit in its own estrangement, from its values.

But in reality, for most Americans the moment that Barack Obama announced the killing of Osama Bin Laden was a rare happy chapter in a miserable year. His death was largely cheered on all sides as the one necessary and comparatively uncontroversial death in the midst of a dirty and divisive war.

Therefore Zero Dark Thirty is not going to score any points by suggesting that such a populist killing was morally vacuous because terrorists were tortured and innocents were killed in order to get to OBL. If Boal and Bigelow really wanted us to examine the efficacy and morality of torture they’d have us thinking about the occasions its use didn’t result in a terrorist mastermind being apprehended. Or they’d more properly examine the complex issue of whether any meaningful evidence was ever obtained via waterboarding. 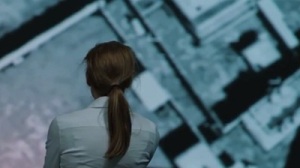 Unfortunately the audience is never given the chance to assess these debates because they’re not presented to us. We’re only presented with a limited and subjective chain of events in which torture did indeed lead to OBL (although in reality it very probably didn’t). Just a small scene, or piece of seemingly throwaway dialogue, showing or referencing the human cost of torture for those mistakenly apprehended by US forces might have balanced the books. Or at the very least a scene in which the ethics or utility of torture are discussed among the CIA agents. No such instance materialises. The nearest we get is a moment where the gathered agents watch President Obama on TV repudiating the use of torture. They don’t comment, but their dismissive glances suggest their disagreement, as you might expect.

Even if torture was shown to have an effect on the psychology of its torturers the film might be more even-handed. Maya is often referred to as “tired” but never disturbed by her line of work, and all we get from Dan is his jokey insistence that he’s angling for an office job because he’s fed up of “looking at naked men”. Maya’s tears in the final scene are the only hesitant and contemplative aspect of the whole film, and really it’s not enough.

Bigelow and Boal’s defence rests on their claim that they have presented the occurrences in documentary fashion, but this isn’t a documentary; it’s entertainment – the hunt for Bin Laden is imagined to be a fascinating and exciting search.

Sure, the screenplay is procedural and forensic in a way that’s markedly different from the traditional spy genre film. But the screenplay still fully adheres to traditional Hollywood screenplay structure, right up until the (spoiler follows in white text) death of the character Jessica/ Camp Chapman bombing, the story arc’s low-point and an archetypal example of what British screenwriting guru Guy Meredith would call the “deep shit” juncture.

At numerous points the script reminds us that this has become Maya’s personal quest; she openly claims she’s going “kill Osama Bin Laden” herself and that her life was spared from previous tragedies so she can “finish the job”. It’s necessary for a mainstream film to anchor the story in a determined, obsessive central character in this way, and as a result Boal/Bigelow’s documentary defence doesn’t ring true. We are not presented with a factual, chronological list of the facts and events, but a very deliberate and subjective chain of events that exists to influence the trajectories of the protagonist’s journey.

A good documentary that aims to as unbiased as possible will present different viewpoints so the viewer can make their own judgement. Boal and Bigelow presumably imagined that the film would similarly ask us to come to our own judgements about the brutality of the war on terror, but when the viewer is presented with such a restricted and subjective account of occurrences a considered judgement based solely on what we’ve seen becomes impossible.