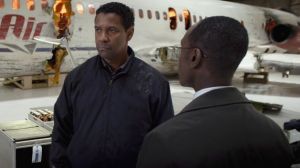 Robert Zemeckis makes a bid to be taken seriously as a director capable of crafting a serious, adult drama with complex themes, but unfortunately comes across as trying way too hard. As much is in evidence in the opening scene, where we’re treated to full-frontal female nudity and Denzil Washington snorting a line of coke while the camera crash-zooms up his nose, like something Scorsese might have tried 20 years ago.

There are two different stories playing out simultaneously in the film, one of which is fairly interesting and another which is humdrum and predictable. In the first a drunk but highly capable pilot (Whip – Washington) miraculously manages to land a passenger aircraft after a catastrophic malfunction and seemingly deadly dive. The post-crash legal and procedural particulars are played out in detailed and realistic fashion, and when Don Cheadle appears on the scene as an insurance officer charged with shifting the blame away from Whip , the film threatens to become interesting as corporate drama with a human twist.

Instead Zemeckis is intent on presenting an overcooked addiction drama in which Washington goes through the usual tropes of self-deception, humiliation, descent into oblivion and eventual redemption.

The problem with the addiction story is that Zemeckis can’t decide which side of the fence he’s on. As with many addiction dramas, there’s always the temptation to portray excessive consumption as humorous, rebellious and somewhat cool. So Zemeckis pumps the soundtrack with Rolling Stones numbers or funk tunes whenever Whip falls off the wagon. One such moments occurs just after a sober scene in which Whip visits his crippled co-pilot in hospital, nakedly contrasting Whip’s exciting, hedonistic approach to the trauma with the co-pilot’s pious and mundane spiritual reflections.

But at the same time the narrative requires that Washington comes clean (in both the sobrietal sense and in delivering the truth about the crash) and that the audience sees it as a good thing, so the film simultaneously plays all the right notes in regards to the alcohol’s devastating effects on his family life and relationships. This perceived duality continues right up to the films’ conclusion, when Whip’s bandana-wearing drug dealer (John Goodman) pumps him full of cocaine in a scene played entirely for laughs, just moments before the big emotional climax in which Whip repudiates the past excesses of everything that’s gone before.

So while the film desperately wants to convey itself as something akin to Kenneth Lonergans’ Margaret, in which a dishonest, culpable yet likeable central character deals with the fallout from a tragic accident, the film comes across as plodding and unsubtle as Paul Haggis’ Crash, with the film bending over backwards to earnestly examine issues it doesn’t have an adult stance towards.