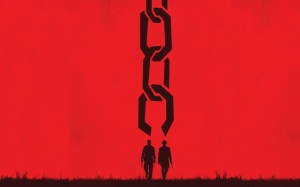 I find it fairly bemusing that some critics have seen Django Unchained is a return to form for Tarantino and a massive improvement over Inglourious Basterds (for example, Peter Bradshaw). Not that I dislike DU, quite the opposite, but come on, it’s basically in exactly the same vein as all his films! It’s highly enjoyable, perhaps slightly more satisfying than IB, but there’s no question he’s going over the same ground, using roughly the same formula. If anyone thinks it’s a return to form or a departure that’s because they’re late in warming to his very particular Rohmer-meets-Grindhouse approach. I’ve long had a theory about Tarantino sceptics like Mark Kermode. I believe all these people can be categorised as types who fell way too hard for Pulp Fiction in the mid-90s and had overly estimated hopes Tarantino would turn into a new American master of cinema, only to be disappointed when he never developed into a Scorcese or Coppolla. Personally I never over or under-estimated Tarantino. He is what he is and will never change, and is more likely to retire before developing into a stately, contemplative director. Thankfully what he is is a very entertaining filmmaker, if we don’t take him too seriously and just go along for the ride.

Django Unchained is only marginally different from his other recent films. It’s slightly less peppered with cult film references. Yes there are nods to The Big Silence, Mandingo and They Call Me Trinity, but in nowhere near the quantity they were needlessly injected into IB, in which every character was smirkingly named after a Eurocult director and the Pabst and Sternberg references were piled up.

It’s also the most structurally conservative film in Tarantino’s entire oevre. All of Tarantino’s films except Jackie Brown were near collages of jumbled up flashbacks, fantasy scenes and digressions, up until IB, which was a formal departure and perhaps one of the more experimental mainstream films of recent times in its utilisation of just a handful of extremely extended sequences. Django is formulaic by comparison. Some scenes are long, but not to an IB extent, and there is only the odd flashback (and only the hooded klansmens digression approaches Tarantino’s usual offshooting tendency).

There is a lot of violence. Being an affirmed old-schooler, Tarantino mostly eschews digital technology for physical gore, but for some reason he’s made his blood spurts very watery, as if gunshot victims are composed with the innards of a watermelon. It’s an odd effect but I quite like it; gory yet cartoonish.

Tarantino is also rather fond of his altruistic, sacrificial death scenes (he must have been affected by The Poseidon Adventure in his youth)and Christoph Waltz duly delivers one. But I’m not sure it works particularly well because Django and Schultz’s relationship isn’t as well developed as it could have been. I’m sure Tarantino wanted it to be a classic buddy western in the vein of Butch Cassidy and the Sundance Kid, and numerous spaghetti westerns, but it never completely convinces as such. Sure, we can believe Schultz would take Django under his wing, especially as he’s such a natural with a gun. But we’re less sure Schultz would risk his life for his new friend, and it stretches credibility even farther when he sacrifices himself. Perhaps this could have been simply remedied has QT inserted a scene where, for instance, Django saved Schultz life. I can’t help feel that had the film featured two female central leads, QT would have conjured a more credible partnership, but for some reason Tarantino struggles more with his male roles.

The film completes what might be called a ‘revenge of the repressed’ trilogy for Tarantino, in which key groups of historically oppressed peoples cathartically wreak vengeance on their oppressors  – women in Death Proof, jews in IB, blacks in DU. It’s difficult to see where Tarantino goes from here, especially as the wider theme of revenge was also examined in the two Kill Bill films. There’s something enjoyable about cathartic violence, and Tarantino knows we can cheer death and destruction gleefully if it’s visited on slave traders and Nazis. When such cathartic violence is only granted to us at the conclusion of extremely long, tense and slow build ups it can make the eventual release an almost tumescent explosion of gory mayhem. It’s an effective technique, but I have the feeling Tarantino will have to try something different next time. Knowing QT, though, I will never expect him to change course too dramatically.